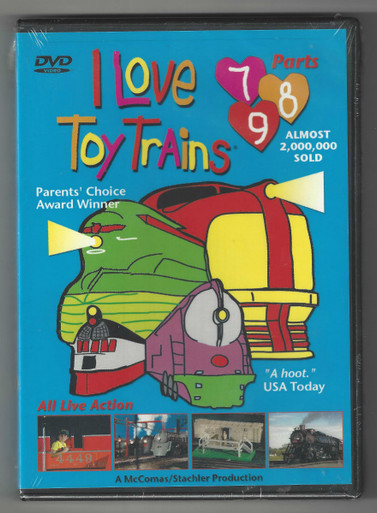 I Love Toy Trains, Part 7 :
We visit an incredible Lego layout where everything is made with Lego blocks, including the trains. Pokemon characters on a Barrel Loader and Crane. All about the Grand Canyon and the Grand Canyon railroad. Counting Those Railroad Cars. When steam was king. The Railroad of America. Streamline steam engines of the 1930s. Empire State Express, the Dreyfuss Hudson, the Commodore Vanderbilt, Hiawatha, the UP's 49er, Pennsy RR's Torpedo, and Jeff's favorite, the Southern Pacific Daylight. Streamliners. Mickey Mouse Meteor – a special train featuring Disney characters. See how many you can name. (36 minutes)

I Love Toy Trains, Part 9 :
Dick Brown's layout with the figure eight, the original 13 colonies train, Yankee Doodle Dandy. Jeff receives a phone call from Joshua Lionel Cowan, a segment on the NYC's Hudson which includes footage of the real Hudson shot in the 1930s, and all the Lionel model Hudsons. The Legends of the Rails. Underground Railroad’s layout with Vinnie, the puppet who loves toy trains. The first five inductees into the All American Standard Gauge Toy Train Hall of Fame. Toy Train Hall of Fame. (33 minutes)

This product hasn't received any reviews yet. Be the first to review this product!